Menu
Log in
Register
Install the app
You are using an out of date browser. It may not display this or other websites correctly.
You should upgrade or use an alternative browser.

Thanks in advance for any help.

New to wood turning. Am trying to turn a 5" diameter by 4 " deep straight vertical sided bowl. Been doing OK with push cut down the sides, not as uniform as iIwould like, but not terrible. See first pict.

When I first started I would push down the interior wall, then drag across the bottom. See next pict for approximate tool orientation across bottom.

Not sure if this is scrape, or pull cut but was working great with super smooth cuts at beginning. Now I am almost half way down and the tool is screeching and I am starting to get catches. I don't believe I have changed the tool orientation. I tried using a 1/2" round nose scraper, but it was catching really bad.

What am I doing wrong?

Also - this is a wet (green) piece of Catabaw Burl. I may have turned to walls too thin as I am seeing a few hairline cracks like the one below.

Should I be worried. Can I use super glue o stabilize and move on?
B

If the wood is screeching, it means your tool is probably dull, you need to sharpen... and the way you are going in the second pic is more of a scrape cut - After you sharpen, when you want to do one of those cuts, try lowering your tool rest a bit, and drop the handle further so the wing edge is presenting at around 45 degrees-ish, which would be a shear scrape (although your grind as pictured isn't particularly conducive to that sort of cut - ellsworth/irish grind does that sort of cut better, IMHO, you can still manage a shear scrape if you are quite careful, very very light touch of a sharp wing .. even more so if the wing has a bit of a burr, which is what does the cutting on most scrapers anyway) Hairline cracks do happen, so you will want to stop and re-check , if the cracks spread or get worse, you may be better off tossing the wood... Also, when turning green, try to plan on sharpening frequently (just a touch-up, or carry a credit card sized diamond hone with ya) because you will want to turn the inside of the bowl as quickly as possible before the bowl starts to warp before your finish cuts can be done.. But overall, I'd say you probably need to sharpen when the tool/wood start to screech at you... May help a bit to keep a spray bottle nearby (non-colored soap and water or just plain water) to spritz the bowl every so often to try and keep it wet as possible.. I have done wet turning where I had to "park" things before I could finish, so I soaked some rags in soapy water, wrapped them around the bowl and then wrap the whole thing as tightly as I could in a plastic bag.. and it didn't warp too badly so I was able to finish the turning the next day..
D

I will adjust tool as you suggest.

Grind. Only have one bowl gouge and it is set to a "std bowl gouge" using the Kodiak system. Unfortunately, the 180- CBN on back order so changing the grind a bit challenging. Good reason to buy another tool .

I do have to park things - tomorrow is mowing day and i will not get back to bowl til at least Saturday. Have covered it in a wet cloth with a zip lock and duck tape. 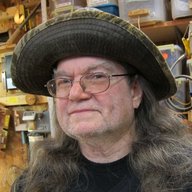 Location
Panning for Montana gold, with Betsy, the mule!

There are a number of things that could be a problem, but it's hard to diagnose from the photo. Brian's advice is a good starting point for finding the source.....

However, that's a very long reach from the tool rest......you'd probably have better luck if you angled the tool rest into the interior of the bowl. 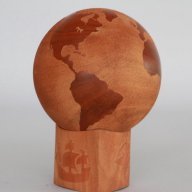 this cut will only work while the bowl has a shallow depth. the bevel that rides is on the side of the wing.
after a 2” or so depth the gouge will have to hit the rim to ride the bevel.
this cut will work great on platters won’t workonbowls.

a better solution here is a bevel riding push cut from center toward the corner.

you Can’t use a bottom of the bowl gouge (80 degree bevel) the turn is too sharp.
R

Well, square sides present, shall we say, 'challenges'. As for the screeching, best bet is that it comes from not rubbing the bevel, and you are doing more of a scraping cut. This is where an actual scraper, or even a NRS could come in handy. They generally do a fair job of cutting when sweeping across the bottom, but not as good of a job as when cutting up the sides of the bowl. A bottom of the bowl gouge also would do a good job here, for everywhere except in the transition area. Just not able to fit a gouge into that area, even if you are coming outwards from the center. 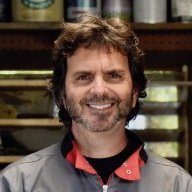 I much prefer an inside without straight lines. A nice inside curve all the way. Makes it easier to sand too. ANd of course, easier to cut.
Emiliano Achaval
808-8541028
www.hawaiiankoaturner.com 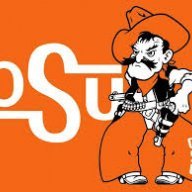 As @Emiliano Achaval suggests, a continual curve is much better in every way, unless you have a need for a specific shape. Is there a reason for the square corner?
B

Doug Freeman said:
As @Emiliano Achaval suggests, a continual curve is much better in every way, unless you have a need for a specific shape. Is there a reason for the square corner?
Click to expand...

Could be just for the challenge? Or perhaps simply not knowing any better?

My very first - Ever- turning on the used harbor *cough*salvage*cough* freight lathe was a mortar out of pressure treated 4x4 pine post , 3 inches deep, straight sides, with a *gasp* Spindle Roughing Gouge... and besides the fact that I was at that time clueless about what was needed for bowl turning (other than the fact that it'd leak if I tried to turn it out of end grain / spindle oriented, which was just common sense) for my first time in 35 plus years, It also turned out to be one of the harder forms to achieve with that limited (and very bent-up) $19.95 "turner's tool set" ... but somehow or other I managed to do it, straight sides and all, and not even that rough (but tons of sanding) .. second time I tried to turn the same mortar (in a piece of hardwood) I very very quickly found out why the SRG and other gouges in the set became so badly bent and deformed..... and thus began my self-education journey starting with a blog article I looked up on google, then YouTube.. and it all began less than a year ago..(October '20) .. (yes, I learn very fast)

But , in a nutshell as a very beginner to bowl turning, I had no concept whatever of the idea behind a nice gentle curve, until after watching a few youtube videos and then realizing I HAD to get a bowl gouge if I wanted to turn bowls.. So.. my first bowl ended up being a deep straight sided object.. and I still have it.. and still amazed I even freakin' MANAGED to do that somehow, with a SRG... every now and then I look at the thing, and just shake my head at myself...

Brian Gustin said:
Could be just for the challenge? Or perhaps simply not knowing any better?
Click to expand...

That is a challenging shape. two schools of though on that
1. Take on the hardest shapes first and all the other shapes will be easy
2. start with the easy shapes and the hard shapes won’t be as hard when you get to them.

you might check out a couple of threads I started in the tutorials and tips. Both include videos of demos for a club.

One is a NE bowl from a crotch. with the exception of lining up 3 rim points the turning is what I do on natural edge bowls wider than high.

Naural edge bowl from a crotch

Turning a crotch is fun and produces a heart shaped bowl with a highly figured bottom. I put a video from a demo I did in may on YouTube. These are nice bowls for turners who have done 4-5 natural edge bowls without getting a catch. While best suited for intermediate and advanced beginners...

The August 2015 AAW JOURNAL has great article by David Ellsworth on working with green wood. This is followed by 11 marvelous ways turners turned cracks into features. One of David's themes is that the deck is stacked against newer woodturners successfully working with wet wood. Might be a nice...